There are so many stories associated with Christmas miracles. It’s a common theme of hope, transformation and redemption that resonates with all of us. Perhaps it’s the goodwill and charity of Christmas infused with the innocent belief of children that dwells in all of us that propels one to rediscover virtuous qualities in ourselves and others, and the strength to change for the better.

“The Christmas Miracle of Jonathan Toomey” written by Susan Wojciechowski and illustrated by P J Lynch is one such book. It was recognised for its literary merits with the Christopher Award for “affirming the highest values of the human spirit”, and its illustrations received one of the most prestigious awards, the 1995 Kate Greenaway Medal from the British Library Association. P J Lynch won his second Kate Greenaway Medal in 1997 for When Jessie Came Across the Sea, written by Amy Hest.

The story’s main character is a woodcarver called Mr Toomey. He is always “mumbling and grumbling, muttering and sputtering, grumping and griping”, annoyed by the church bells ringing, birds singing and children playing. Nicknamed Mr Gloomy by the village children, the woodcarver, who moved to the village after the death of his wife and child, keeps the reason for his sullen disposition to himself.

On a cold winter’s day, the woodcarver is interrupted by a knock at his door by widow McDowell and her son Thomas, whose father had recently passed away. The boy’s mother asks Mr Toomey to make a wood-carved Nativity set for Christmas to replace the one she had lost when they recently moved to the village. Mr Toomey takes the job, but when pressed if he could complete the work by Christmas, he replies, “Christmas is pish-posh,” and shuts the door. 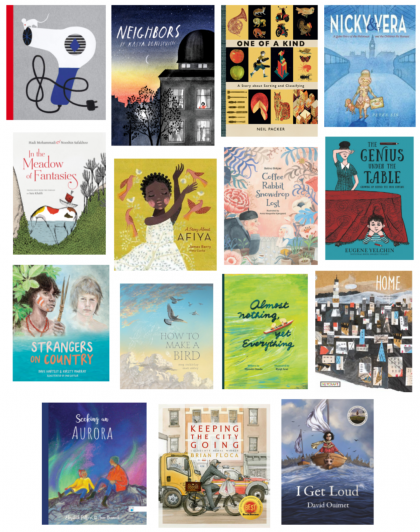 A few days later, the widow and her son return. Thomas asks Mr Toomey if he could watch him work as he too would like to be a woodcarver. Reluctantly at first, the woodcarver eventually warms to the boy despite his interruptions and good-natured advice about how the carvings should look. During the boy’s subsequent visits, Mr Toomey experiences a miraculous transformation and finds himself inspired to put his entire heart and soul into carving the perfect Nativity set that would ultimately please Thomas.

Like all good Christmas miracle stories, the woodcarver is transformed and healed by the innocence of a child and in so doing, comes to terms with his grief. No one ever called him Mr Gloomy again.

The author Susan Wojciechowski worked as a librarian and school teacher. Here is her account of how this book came about: “Every December I read the same two or three classic Christmas stories aloud to the children. I tried to find another one I wanted to read and couldn’t. So I wrote “The Christmas Miracle of Jonathan Toomey”. I’ve never written anything that way before. It just came through me in a flood of inspiration and was finished in less than an hour”.[1] Having come from the heart no wonder that the book ended up having this enormous success. It was even adapted into a feature film starring Tom Berenger in 2007.

Anyone who has read my reviews knows my unbridled admiration for P.J. Lynch. P.J.’s illustrations never fail to heighten the emotional intensity of the text it supports. His ability to articulate the nuance of expression and capture the raw human emotion in his characters, to perfectly encapsulate a scene is nothing short of remarkable, a rare gift indeed. For example, the image of Mr Toomey (below) staring plaintively into the fireplace whilst reflecting on the death of his wife and baby. With the sombre light of the fire reflecting on Jonathan’s furrowed brow and uninhabited eyes, P.J. instantly communicates the poignancy of this scene and its matching text “…his wife and baby died three days apart from each other, so Jonathan Toomey had packed his belongings into a wagon and travelled till his tears stopped”.

P.J.’s choice of colour palette is always just so, and in this instance, the warm earthy tones lend gravitas to the subject matter of this story.

“The Christmas Miracle of Jonathan Toomey” is a timeless Christmas classic that will warm the hearts of young and old.

A very heartfelt story, Lynch is always excellent!!! Special thanks for the history of creation . I didn’t know her.

Agreed – hearfelt, heart-warming, heart-healing, an allronud feel-good story…So pleased that you are interested in the history behind the book creation. I have fun researching this kind of stuff. You’re welcome!