This is the final instalment of my review series on “The Snow Queen,” and I invite you to revisit the earlier three posts highlighting the stunning illustrations by Vladislav Yerko, the dramatic and haunting illustrations by Pavel Tatarnikov, and the imaginative and exquisitely beautiful “children’s gothic” style illustrations by Galina Zinko.

In this post, I present the Russian edition of “The Snow Queen,” published by the Sretensky Monastery in 2009 and adorned with illustrations by the Soviet master of graphic art, Oleg Vasiliev (1931-2013). This edition also features an unabridged, authoritative translation by the highly acclaimed Soviet luminary, Anna Hansen (1869-1942).

The decision to publish this edition by the Sretensky Monastery was driven by the desire to restore references to Christianity that were censored in Hansen’s translation during the Soviet era. Examples of these censored passages include Gerda and Kay singing Evangelical psalms about the child Christ, Gerda praying throughout her journey to find her dear friend, and the final scene in which Kay’s Grandmother reads from the Bible. The verse she reads, from Matthew chapter 18:3, states, “If you do not become like little children, you will not enter the Kingdom of Heaven.” The Sretensky Monastery has proudly published Hansen’s complete, uncensored translation, which, given her talent and reputation, is considered to be a faithful representation of Andersen’s original work.

In an earlier post, I emphasized the importance of a high-quality translation compared to an abridged or rewritten version, and the three previously reviewed editions suffered from varying degrees of incompleteness or inaccuracy. Hansen’s translation, renowned for its nuanced understanding of the original text, is a match made in heaven for Andersen’s classic tale.

Anna Hansen was a truly remarkable individual. After graduating from university, she began working as a secretary assistant for Peter Hansen, a Danish diplomat stationed in Russia and a talented translator of Scandinavian languages into Russian. Eventually, Anna and Peter married, and Anna became fluent in Danish, Swedish, and Norwegian. The Hansens became co-authors and co-translators, leaving a legacy that includes the translation of all of Hans Christian Andersen’s and Henrik Ibsen’s works into Russian, as well as numerous other Scandinavian authors.

Anna also independently translated in verse the works of Shakespeare and Peer Gynt. In 1907, Anna and Peter were honoured with the prestigious Pushkin Prize from Russia’s Academy of Sciences for their outstanding services in the field of literature. Tragically, when the October 1917 Revolution occurred, Peter was on a diplomatic mission outside of Russia and was unable to return, while Anna remained in Russia and devoted herself to her work as a translator, teacher, and author, which was highly valued. Unfortunately, her life was cut short by WWII. She passed away in 1942, having survived the first of the three brutal winters of the Nazi siege of Leningrad.

The illustrations in the book under review are as worthy of attention as their translation. Oleg Vasiliev, the illustrator of this edition, was a leading figure in the Russian nonconformist art movement. As a painter in the Soviet Union, Vasiliev struggled to make a living, so he turned to illustrate children’s books, which was a more stable and lucrative occupation. His success in book illustration allowed him and his peers to participate in the Soviet Nonconformist Art movement, also known as the “dissident” art movement, during the “thaw” period under Nikita Khrushchev, who succeeded Joseph Stalin following his death in 1953. During this “thaw” period the Soviet Union opened up to Western culture and visa versa.

From the 1950s through the 1980s, Vasiliev illustrated children’s books with his friend and collaborator Erik Bulatov and created a unique style of illustration by combining realistic painting with other graphic elements, including integrated text. Vasiliev remarked on their collaboration, saying:

This was interesting. We were illustrating books together. But we have invented this artist who was neither Oleg Vasiliev nor Erik Bulatov. This was someone else, a third person and all our books are illustrated by him. During 30 years of collaboration we have illustrated more than a hundred books. And when spring came we would each retreat to our studios and each was free to work on his own art during the summer season.

Below are some examples of typical Vasiliev-Bulatov illustration works (from “Wild Swans” by Andersen, “The Sleeping Beauty” and “Cinderella” by Charles Perrault):

In the 1900s, both Vasiliev and Bulatov immigrated to the United States, where they found commercial success as artists. In fact, one of Vasiliev’s artworks was sold at a Sotheby’s auction in 2008 for nearly £470,000. Examples of his art can be browsed here.

Vasiliev and his peers made a significant contribution to Russian avant-garde art and were highly acclaimed on the international art scene. Robert Storr, the author of “An Enlightened Man in a Dark Place and Time” (2014), wrote, “It may be hard to believe that three artists working with limited means in a closed society once changed art history. But they did. The three are Oleg Vasiliev, Erik Bulatov, and Ilya Kabakov.”

The illustrations for “The Snow Queen” were created solely by Vasiliev, rather than being a collaboration with Bulatov. The book is generously illustrated, with images appearing on almost every spread. These illustrations are full of energy and movement, with realistically rendered characters often placed in impressionistically painted landscapes, depicted with fluid watercolours and blurred outlines. Vasiliev’s watercolour technique is particularly effective in conveying speed, such as the Queen’s sled soaring through the night sky amid dark winter clouds on the verge of a stormy snowfall, or the horses and riders of the dreams galloping around the palace of the Princess and the Prince during the night.

The grandeur of the Snow Queen’s palace is depicted in a surrealistic manner, as if the white Northern light, filtered through the icy walls of the palace, has separated into the individual components of the colour spectrum, then recombined into a dazzling symphony of dancing, shimmering lights. Or are these dancing lights of the Northern Aurora Borealis visible through the transparent ice walls?

Vasiliev’s portrayal of the characters appears to pay tribute to a brilliant and highly acclaimed animation of “The Snow Queen” produced in the USSR in 1957 (a link to which is provided at the end of this post). This one-hour-long animation was, for many Soviet children, their first introduction to Andersen’s masterpiece fairy tale. It won numerous international awards and, to this day, animators, layout artists, and designers discuss it as an outstanding adaptation.

Every Soviet schoolgirl dreamed (I certainly did for years) of a New Year carnival costume of the Snow Queen, similar to the one in the animation and very similar to the illustration below. Enjoy browsing the images below of the enchanting world of “The Snow Queen,” as seen through the talented eyes of Oleg Vasiliev.

To conclude, for those seeking to introduce their young ones to Andersen’s masterpiece through the screen, we present the wonderful animation of “The Snow Queen” produced in the USSR in 1957 (in Russian with English captions), which was mentioned earlier. While it deviates slightly from the original by censoring out all references to religion, faith, or Christianity, it remains true to the spirit of Andersen’s tale and is one of the most successful animated adaptations to date, having delighted generations of Soviet children and continuing to delight their descendants. 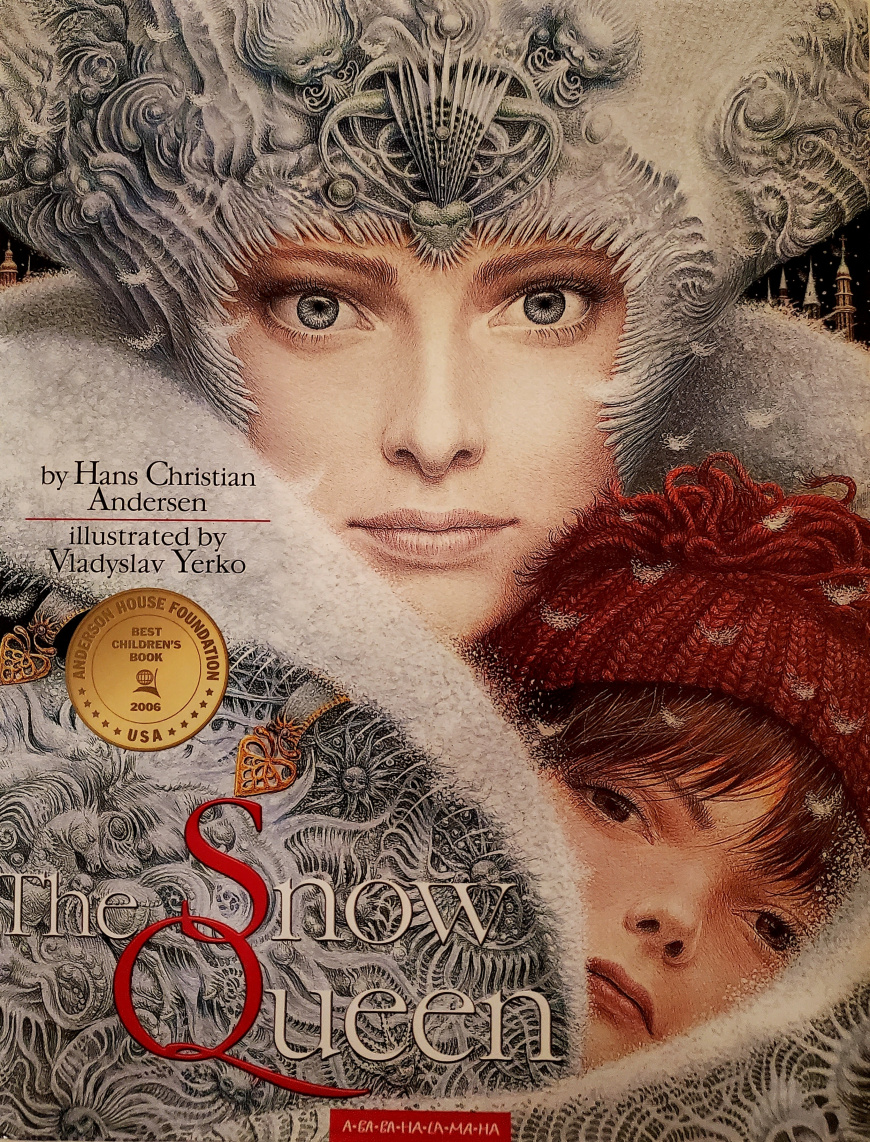