Picking up from my earlier post on Tara Books, this is an account of my  impressions from meeting two talented book designers, Ragini Siruguri and Dhwani Shah, who were visiting Australia earlier this year running workshops and spreading the love that goes into producing Tara Books.

Dhwani’s latest creation is “Twins”, an interactive book offering young children the tools to help draw a mirror image (a “twin”) of an animal character on the opposite page, place the animals in a setting of their choice thus designing a storyboard for imagining and telling a tale about the twins.

Dhwani imagined this book as an experience to encourage creative flow. It includes stencil outlines of animals and a few abstract ideas and pointers for character and story development. The rest is up to each creator’s imagination.

Asked about how she came up with the idea for “Twins” Dhwani tells of her own experience when studying drawing. Students were instructed to keep copying numerous images created by others as a way of developing their drawing skills. Whilst copying as a learning technique for drawing and painting goes back in time and still has merits (think of aspiring artists copying the old masters at the Louvre) persistent copying on its own can inhibit creative expression. Dhwani and her fellow students felt lacking the opportunity and freedom to sketch out of their imagination and to express their own vision. “Twins” is her attempt to offer such freedom in designing one’s own set and strory with just enough tools to help little kids kick start the creative process.

The animals used in “Twins” are derived from the ritual art tradition of painting practiced by Rathwa community from Gujarat in India. Their simplicity and stylised silhouettes have an immediate appeal to children.

The Sydney based workshop, organised by Tara Books in March 2018, brought together a group of kids to draw, sketch, color and play with “Twins” pictures and words. A session of fun concluded with children presenting their stories to the rest of the group and the parents. We have engaged with all kinds of plots on the day: from cute and cuddly to scary and somewhat gloomy, the latter has been re-imagined on the spot and presented again with a more uplifting end. It is incredible what kids can come up with in a free-fall kind of mode.

In conclusion I’d like to share my admiration for the hosts of the workshop: “Lost in Books” store in Fairfield, known as the “kid’s bookshop that speaks your language”. Apart from English they stock books in Arabic, Azeri, Catalan, Chinese, German, Hindi, Indigenous Australian, Italian, Russian, Spanish, Somali, Tamil, Vietnamese… I was so impressed! A fantastic stock list, friendly young team and great vibe all around! If you’re down the Western surburbs way be sure to visit. “Lost in Books” stocks all Tara titles in print (if they don’t have it on the shelves they will order for you).

Grateful to have discovered “Lost in Books”,  to have met their team, Ragini and Dhwani from Tara Books and for being part of this fun event enjoyed by everyone involved! 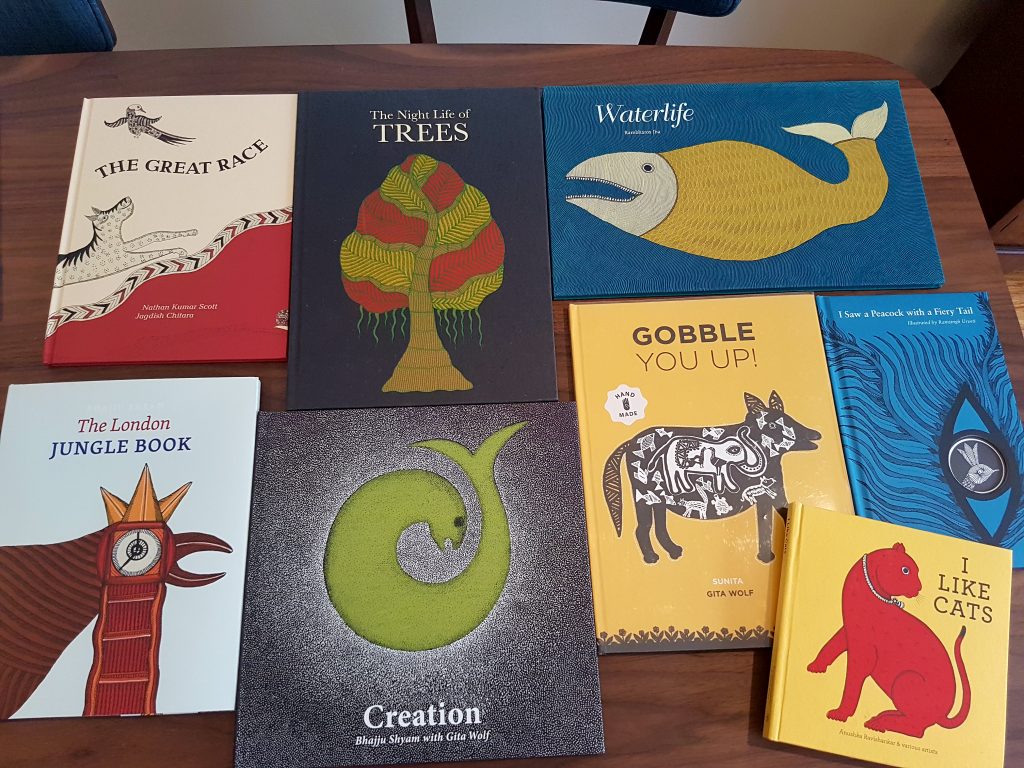