Gavin O’Keefe is one of Australia’s most talented book illustrators and graphic designers. He is a trained violist who worked as a professional orchestral musician.  His interest and passion for illustration have since overtaken his orchestral life. Despite not going to an art school he received some formative art training and inspiring guidance at high school and after that has followed his own artistic path.

His illustrations appeared on book jackets, in science-fiction magazines, horror comics, media guides and educational resource books. He works as a commissioning editor and illustrator of covers and dust jackets for the US publisher Ramble House for over 20 years now. At age 25 he was the youngest artist whose illustrations for “Alice’s Adventures in Wonderland” (1990) were included in the exhibition “Alice 125. A celebration of the world’s favoruite books” in Melbourne in 1990, commissioned by Carroll Foundation to commemorate 125th anniversary of “Alice’s Adventures in Wonderland” publication.

I have reviewed both the 1990 version of Gavin O’Keefe’s “Alice’s Adventures in Wonderland” (The GO Alice) and his other “Wonderland” version created twenty years later and published together with the sequel “Through the Looking Glass” illustrated at the same time. The latter was published in 2011 in a combined volume called “The Alice Books”.

I have spoken to Gavin about his artistic process and journey of illustrating “Alice” and what these discussions revealed is captured in my reviews of these books. Below are his answers to the questions that were not included in my book reviews referenced above, but I feel that they illuminate certain aspects of the artist’s background, artistic process and even give a glimpse into his future plans, about a future 3rd “Alice”!

1. You are a professionally trained violist and an orchestral musician. What was the catalyst that transitioned you from musician to illustrator?

I didn’t fall into music by accident, but by interest and design from a young age. I always wanted to be an orchestral musician. I started learning the violin and later switched to the viola (an instrument better suited to me). I was fortunate to be successful in auditioning for the ABC Sinfonia (previously known as the National Training Orchestra) after high school so began my professional life as an orchestral viola player. I also did freelance work in string quartets, local orchestras and street busking. But I felt that classical music didn’t fit with where I wanted to go with my music, so I decided to leave the orchestral life and devote my energies to book illustration.

2. What do you find appealing about a career in illustrating children’s books? What are its biggest challenges?

I am driven to illustrating the literary works of others, and so the appeal is the possibility of that happening in such a way that others will have the opportunity of reading that text alongside my illustrations. This leads to the considerable challenge — after the ultimate challenge of the artistic work — of finding a publisher for my new illustrated version. This is never easy.

3. Does your musical background influence your art and illustrations? What music inspired and continues to inspire you? Do you listen to music while you illustrate?

Music absolutely influences my art, and does so on a few levels. I always have music playing while I draw—it is my preferred working environment. On another level, if I am working on artwork that is directly associated with certain music or musicians, I immerse myself in that music. It is virtually impossible to list all the music that is important to me—my music library is large!

4. What are some of the most memorable (good, bad or challenging) illustrating projects you have worked on? What made them so memorable?

All my illustrating projects have been challenging and memorable, each in its own peculiar way. Perhaps the most challenging illustrating project I have undertaken is my version of Lautréamont’s Les Chants de Maldoror. I had wished to illustrate that work since I first encountered it thirty years previously, but it wasn’t until 2015-2016—when I had the opportunity to devote time to it—that I could do justice to my ‘vision’. The illustration work was done in conjunction with the exacting task of making my own translation of the work from the French. Altogether a very ambitious project, and one I am proud of.

5. Tell us more about your two decades of work with Ramble House publishing house? How did you end up working for a US-based (rather than Australian) publisher?

Around 2000 I came into contact with Ramble House via the novels of American author Harry Stephen Keeler, whom I had only just discovered. Ramble House were just then embarking on the mission of reprinting every one of the 90+ Keeler novels and when I volunteered to design the covers of those books Fender Tucker, head of RH, welcomed me into the fold. I have been part of the Ramble House team ever since.

6. Who would you consider to be your biggest literary and artistic influences? Why?

Two artists who continue to inspire me and who have influenced me for over forty years (since I was a child reading their books in primary school) are Tove Jansson and Charles Keeping. They were book illustrators, and they also wrote their own books as well as illustrating other writers. Artists I discovered as an adult and who have inspired me for over thirty years are legion, but here is a core list: Aubrey Beardsley, Mahlon Blaine, Harry Clarke, Quentin Crisp, Salvador Dalí, John Geary, Edward Gorey, René Magritte, Mervyn Peake, Tom Phillips, Francis Picabia, Sidney Sime, Austin Osman Spare, Louis Wain.

7. Can you describe your process for illustrating? How do you start? Do you model your characters on any real-life people, your friends or family?

The process of my illustrating a particular work starts with me immersing myself in it. Reading it over, thinking about it, even dreaming about it. I have to not only think about the work — I have to feel it. For me it is a personal collaboration, even if the author of the text is no longer with us.

8. What was your favourite book when you were a child, a teenager and now as an adult?

Hard to choose a favourite book as a child, but any of Tove Jansson’s Moomintroll books would rate highly. As an adult, some favourite books are Lewis Carroll’s Alice books, The Maniac by E. Thelmar, and Les Chants de Maldoror by Isidore Ducasse.

9. How did the idea of illustrating “Alice’s Adventures in Wonderland” come about? Were you commissioned, or was this something you felt compelled to do? Did you have a publishing deal, or did you have to pursue one?

I read Lewis Carroll for the first time in the mid-1980s, when I was in my early 20s, and I was so inspired that I immediately began illustrating Alice’s Adventures in Wonderland. It was all from the heart; I had no publishing deal, nor even an idea of whether any publisher would ever be interested. Once I had made my Alice illustrations I went looking for an interested publisher. Initially nobody was interested, but I was eventually approached by the Carroll Foundation in Melbourne, who had heard of my illustrations and were interested in publishing them.

10. By the time you’ve illustrated “Through the Looking-Glass”, you noted that you had moved on artistically and philosophically from where you were in the 1990s; can you please tell us more about the nature of these changes?

Twenty years on, a creator—whether literary, artistic, or musical—is bound to have developed and changed their outlook, and even their style. That was the case with me. An artist is always learning, honing skills and finding other influences, so inevitably the style of my art is bound to change. One only has to compare the pen-work of my 1990 GO Alice with that of The Alice Books to discern a change in style. Perhaps harder to pinpoint a change of philosophical approach, but I believe that development is also present.

11. If you were to reflect on your relationship with each of your “Wonderlands”, what would it reveal? Both of your “Alice’s Adventures in Wonderland” are very different, like siblings with different personalities. As the parent, can you say you prefer one over the other? If so, why? If not so, why?

From a ‘parental’ perspective, I would favour both of my Alices equally. One can’t disown or divorce oneself from either—nor would want to. Each represents me at different stages of my life, and at each time respectively I put all my energies and time into each version. When I work on my third illustrated version of the Alice books in the future, this same argument will apply.

12. In terms of your illustrative career, how do you measure success, and where would you like to see yourself in ten years?

Since I have never made enough money from my illustration career to live on, I don’t measure that career in terms of money. I measure success in terms of the reactions of readers — the people who see my illustrations in books they read. This can mean either positive or negative responses, it doesn’t matter, as long as there is a reaction. I mean to make a difference through what I do, as opposed to satisfying some imagined audience. In ten years I’d like to see myself alive and with my wits about me. 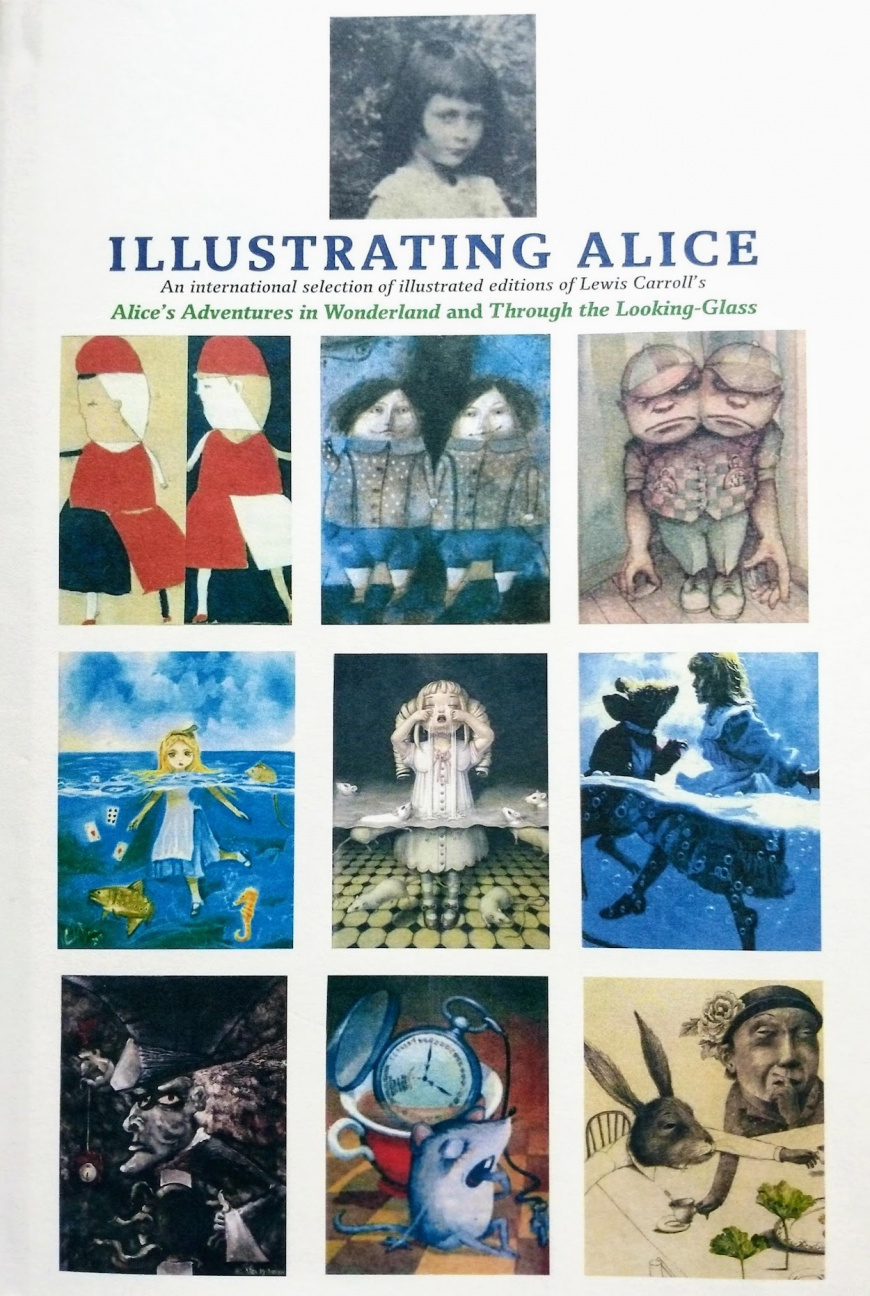 Natalia Bragaru, from Sydney, is a genuine expert when it comes to children's books. She authors the blog that tells the stories about illustrators, authors and books - both classic favourites in Russian as well as Australian ones. As well as helping busy parents find quality reads for children, Natalia shares her eclectic mix of illustrated books with fellow bibliophiles.
5 2 votes
Article Rating
Subscribe
Login
7 Comments
Oldest
Newest Most Voted
Inline Feedbacks
View all comments

What a fascinating interview! Thank you for sharing. Is so interesting to read more and find out more about Gavin and his process. What fantastic artistic influences! Gorey, Beardsley and Peake are a great combination. Exciting to know there will be a potential third edition. Managed to finally find your double edition today so is on the way!

Thanks for the great comments, David! And thank you for seeking out my double-edition. 🙂

Thanks for such great feedback, David! Gorey, Beardsley and Peake are rarely found in one sentence aren’t they, such vibrant combination of influences. I agree that a third edition would be very exciting. Congratulations on landing the double edition of “The Alice Books”!

I read the interview with great pleasure, it’s like personally talking to such a famous artist as Gavin. Thank you, Natasha! I am eternally grateful that I have these amazing books. We wish Gavin an inexhaustible source of inspiration!

Masha, thanks for your feedback. And congratulations on having both Gavin’s “Alices”!

Thank you both for your feedback, Petal & Madam Ziva. I agree that Gavin’s art is intriguing and his books are true gems in my ‘Alice’ collection (and I beleive in yours too! 🙂