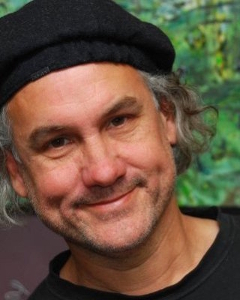 As a child, Stephen Michael King has been through a condition of hearing loss. He tells of his world becoming silent and introverted for a while. As a result, writing and drawing have become his trusted forms of communication. After leaving school he worked at the local library where he read stories to children, then worked as an artist at Walt Disney studios and later as a designer and illustrator for a children’s publisher. Since then Stephen has and illustrated over a hundred children’s books. He has also written many of his own books, some of the well-loved favourites are The Man Who Loved Boxes, Milli, Jack and the Dancing Cat, Emily Loves to Bounce, Mutt Dog, You, Leaf.

When asked “What would your ten-year-old self say to you now?” Stephen responded: “You’ll move to the country and discover it’s full of creative people: farmers who can make anything from a piece of wire; painters living near waterfalls; sculptors living in sheds; and people who make beautiful jams and cakes… you’ll never forget or give up the simple things. Money and status won’t seduce you as much as sharing a cup of tea on the back step, your father telling you he was proud, eating a cumquat straight off the tree, walking barefoot everywhere, listening to your wife sing and watching your children being children”. At present, Stephen with family and their rescue dogs live a down-to-earth life on a beautiful island, off the east coast of NSW Australia.

Stephen’s children’s books are published in over 20 countries and frequently appear in children’s choice awards. He won numerous awards, most recently an Honour Book at the 2015 CBCA Awards for his illustrations for Scary Night, the Speech Pathology Australia 2015 Book of the Year Award for Snail and Turtle are Friends, 2016 Western Australia’s Premier’s Book Award for The Duck and the Darklings, 2017 CBCA Notable books for Snail and Turtle Rainy Days and Fizz and the Police Dog Tryouts.

“I didn’t want to be a grown-up when I grew up! I knew how free-spirited bare-feet, long grass and standing on my head felt. I was well aware that adults mostly wore shoes.”
Stephen Michael King